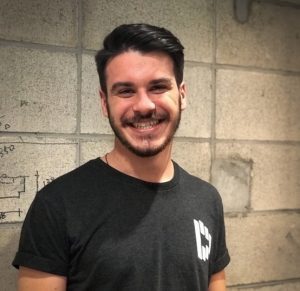 Paul: Greg Jeanneau is a talented UI/UX designer who moved to Tokyo from his native France in January of this year. We talk about Greg's background as an engineer, his transition to a career in design, his passion for photography and life as a new arrival in Japan.

Thanks for speaking with me today, Greg. Please please tell us a little about yourself.

I’m a French UX/UI designer living in Tokyo. I grew up on a small Atlantic island where Parisians like to go on vacations. It’s called Noirmoutier but it’s a mouthful for foreigners, so I usually don’t mention the name. I moved to Japan in January.

You studied engineering and entrepreneurship back home in France. What kind of career did you have in mind at that time? Were you already thinking about a career in design?

Design was always in the back of my mind. During my studies, topics like ergonomics, architecture, or animation were attractive to me: I love thinking from the human perception. I like to understand how people think to create emotions.

Luckily, I managed to transition. I’m glad I’m not building bridges, people are safer this way. I did learn how to code which I now use every day to communicate better with developers.

Please tell us a little about your career experience before coming to Japan.

I quit my full-time job 3 years ago to go freelance and moved to London. I then came back to Paris when I started helping Dashlane, the password management company (they didn’t accept remote work at the time). During my time there I mainly worked on redesigning the onboarding. Our approach was to differentiate it from the competition by making it feel more human. We were inspired by how doctors build trust with their patients and lifted retention by 7.3%. I wrote about it here.

How did you end up in Japan?

I think of it as a designer’s paradise, I’ve been wanting to try the experience of living here for a while. Japanese attention to details and quality is giving me an inspiration shot every day. Something as simple as the FamiChicki packaging shows how they think of the entire experience.

During a short first visit here in 2016, I wasn’t a designer yet but I still felt like this culture was so deep that I only had seen the tip of the iceberg. I promised myself I’d come back. I found the right timing to do so this year.

Tell us about your current work as a freelance designer.

I usually do UX/UI design. I like to say that I make your product better than your competition by making it more delightful, more usable and more useful to people. I can do Web, iOS and Android, but my real preference is working on problems that make people say “thank you”.

I’m now trying to find clients in Japan and just found my first two ones. It’s a bit different from what I usually do: they’re two people trying to change careers and need a website. (A gym trainer who wants to become a photographer, and a model who wants to sell vegan cakes in Japan). As an engineer who became a designer, it feels very rewarding to help people change careers.

I usually help business with the full design process: from user research to UX/UI design, and then collaborating with devs. I have a degree in engineering and business, which I use today to better communicate with developers and to create design strategies that are both useful for the users and the business.

How would you describe the difference in approach between UI/UX design in Japan and in France? Is there a French design ‘aesthetic’ and if so, is it something that you have incorporated into your own design style / philosophy?

I find that designing a UI in Japanese can be quite different because of kanji. Japanese people seem to scan text differently than us: we have to read a word in its entirety to make sense of it,  but reading a kanji is like seeing an image. In that sense, scanning an interface is almost like reading icons for Japanese people. I really like studying those differences, there’s a lot to learn.

I don’t like routine so I try avoiding having a typical day. I try to inject some randomness in my days so that I can find new inspiration. That could be simple things like walking in a new neighbourhood, going to work in a new café, meeting new people, etc. I usually measure that with the number of photos I take. The fewer photos, the more routine my day is.

I used to never take photos of people but I recently changed that following my friend’s feedback. However Japanese people are pretty private, so doing street photography here can be challenging. To adapt to these constraints, I set myself the rule to always respect anonymity (no faces in the frame) and I bought an old zoom lens from the ’80s (80-210mm) that allows me to stand far from people. The best way to see them is to hop on my Instagram.

I started to be more committed to photography after meeting a National Geographic photographer in the Philippines. He used to be a biologist and took pictures around the world during his research trips, before eventually becoming a full-time photographer. After meeting him, I set myself the challenge to take a picture per day for 100 days. I think it’s one of the main things that helped me.

Relocating to another country during a pandemic must have been difficult, to say the least. How did you handle it?

It wasn’t easy but it made the arrival even more so delightful. I had to postpone my plans for almost a year. There were some added steps in the visa process, plus 3 Covid tests, plus 2 weeks of isolation.

Overall, I think it might look more difficult from the outside than it was. I would definitely advise anyone to go for it if they have the opportunity. I did have some friends here already – made during previous trips – which definitely helped.

What are some of your goals for the future? Short term in Japan and long term in general?

Establish a successful freelance business in Japan. I don’t mean that in terms of money (I don’t see money as a destination, but only as the fuel to get there) but in terms of making work that is appreciated and useful to people.

– most important piece of advice you’d give yourself if you could go back in time to your arrival in Japan?

Be wary of the negative feedback you see about Japan, everyone has a different experience here.

– how do you learn new skills?

That’s a question I’m really passionate about. Here’s how I would present it if I turn it into a metaphor about cooking:

– tell me a few of your favourite or most recently read books, movies, podcasts, games?

Let My People Go Surfing: The Education of a Reluctant Businessman – Yvon Chouinard: to learn about the story behind Patagonia. [Amazon Japan; Amazon US / UK / CA / FR / DE / ES / IT]

Creativity, Inc.: Overcoming the Unseen Forces That Stand in the Way of True Inspiration – Ed Catmull & Amy Wallace: to learn about how creativity is managed at Pixar and how the movies were made. [Amazon Japan; Amazon US / UK / CA / FR / DE / ES / IT]

Shoe Dog: A Memoir by the Creator of Nike – Phil Knight: to understand how Nike became the brand that it is today. [Amazon Japan; Amazon US / UK / CA / FR / DE / ES / IT]

I love this movie because, despite its simple setting, this film deals with complex psychology. It occurs in just one room and revolves around dialogue, 1 against all. They figured out how to make the most of a tiny budget, which I see as embracing imperfection.

– your favourite place to visit in Japan?

Mount Fuji. This place has a majestic presence that you cannot feel in pictures.

A surf trip in Chiba. I grew up doing kitesurfing so I can’t really assess how good the surfing conditions are in Japan, but it was great for learning. I do love the surf community here, Japanese surfers are quite refreshing and open-minded.

You can find Greg’s online profile and portfolio here. Feel free to reach out if you need a fantastic UI/UX designer!

Looking for a new IT job in Japan? Check out my job board. Hiring? Get in touch and let’s see if I can help.

Please take a moment to share this article. It really helps to support the site:

If you enjoyed this article, sign up for my newsletter!

1-2 emails per month with articles like this, Japan IT job news, articles on tech, life in Japan, and more.